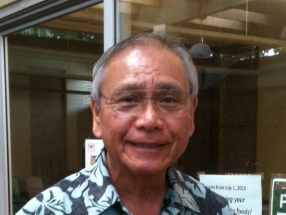 The Susannah Wesley Community Center, nestled in the center of the Kalihi-Palama area, is home to a network that provides services for individuals and families, many of whom are immigrants, to help them assimilate into the local community. There you might see Dominic Inocelda, a Clinical Administrator, bustling around the building complex, going from administrative gatherings to meetings with clients that the Community Center services. He’s been there since 1982, and works with limited English and non-English speakers, including the elderly and those with mental illness. Dominic has a master’s degree in social work from the University of Hawaiʻi. In addition to his work at Susannah Wesley, he is the Chair of the Inter-Agency Council for Immigrants and Refugees (IAC), which, according to the Department of Labor and Industrial Relations (DLIR), was influential in passing the state’s Language Access Bill in 2006.

Despite being fluent only in English, he enjoys engaging with the languages that many of his clients speak, including Ilokano, Tagalog, Spanish, and recently Korean. He also enjoys working with staff members at Susannah Wesley who speak other languages.

Growing up, however, he didn’t feel the need to learn a foreign language, much less the Ilocano and Tagalog languages that his parents and grandparents spoke.

“And actually, we made fun of the language,” he recalled, “because the sounds were very different. And at the time, there was a lot of fun made about Filipino languages, so we weren’t really encouraged to learn the language. When I was about six or seven years old, my father was playing his Filipino music, and he liked it, yeah? But my brothers and sister were making fun it. We were laughing at the dinner table and he got so mad, ’cause all we heard were the funny sounds. He got really upset — it was sorta as if we were mocking him for his language, so that’s probably why he never spoke to us in Filipino either. But I know he could, ’cause when we’d go to grandma’s house, his mother’s house, he’d be talking with her.”

After graduating from Waipahu High School in the 1960s, Dominic went straight into the military, where he served in the Air Force. It wasn’t until then that he became interested in foreign languages.

“Before then,” Dominic noted, “I didn’t know that there were so many different people… The scene was totally different for me. And that kind of cultural difference had an impact on me.”

The Air Force was also a confidence builder for Dominic. In high school, he and his Filipino and some other ethnic friends were not encouraged to continue on to college.

“We were better off working as laborers or on the plantation. It was not really encouraged that we go to college. The honors students, they knew that they were going to college, but I didn’t really know what I wanted to do. It wasn’t until I joined the Air Force and got to work with people of other races, especially Caucasian, that I realized that they weren’t as smart as I thought they were. I started gaining confidence in my abilities.”

Dominic also enjoyed reading, and spent much of his free time at the library, reading books and preparing for college, which he planned to attend after his time in the Air Force. He took advantage of the GI Bill when he was around 22 years old, and attended Leeward Community College before transferring to the University of Hawaiʻi at Mānoa. There he became involved with “Operation Manong,” a program that connected university students — to assist in school work and recreational activities — with local intermediate and high school students, mainly in the Kalihi-Palama community. It was at Kalakaua Intermediate School where he first became acquainted with Susannah Wesley, where he supported and educated students through recreational and educational activities, which often were held on the grounds of the Community Center. This unofficially began what was to be his longtime service to community members at Susannah Wesley, where he would return in the future.

Back at UH, it was an American Studies course that introduced him to Filipino issues, especially through literature and culture. He began taking courses in Ilocano soon afterwards.

“I made a lot of Ilocano-speaking friends in the process, and it was intimidating at first, because a lot of them could already speak the language, and I wasn’t good at languages, even ‘til today. But, especially now, I have a strong interest in languages because I work in a field with a lot of immigrants.”

After college, Dominic worked on Maui for two years with the County of Maui’s Youth Center programs.

“I worked with a lot of Filipino kids in Pu’unene.” He noticed that the kids he worked with spoke English to him, but spoke in Filipino to their parents, many of whom were plantation workers who had come from the Philippines.

After graduating from the university with a BS in Sociology, Dominic went to the state employment center, where he was told that he couldn’t do much with his degree, and should consider continuing his education.

“I always liked to work with people,” he said, “so I started looking at entering the School of Social Work. I had one more year of the GI Bill, so I figured I’d better use it up.” 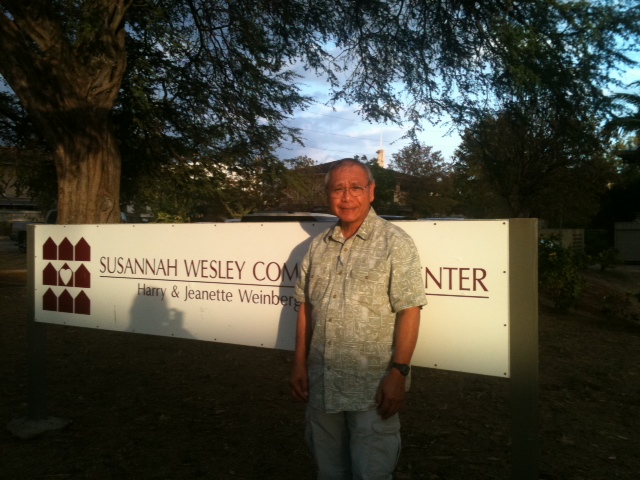 Through his work at Susannah Wesley, Dominic Inocelda has cultivated an appreciation for language, especially among those who don’t speak English as a first language, and those who can speak another language, no matter how much or how little they speak.

Dominic ended up completing his first-year social work practicum with Susannah Wesley’s immigrant services program, and continued to work with them. He met a lot of people with Filipino, Korean, and Samoan backgrounds, and came into contact with the different languages they spoke. It was at Susannah Wesley that he began fostering an appreciation for language, especially among those who didn’t speak English as a first language, and those who could speak another language, no matter how much or how little they spoke.

“When a worker spoke to [clients] in their native languages, you could just see their faces light up. They could turn to that person and really convey, without stuttering in English, what they were genuinely thinking or feeling.”

This sort of conversation also begot more information. In fact, much of the information that clients might not have shared with others flowed naturally when someone spoke in their native language to them.

Dominic discovered that there often is a disconnect between people with different cultural backgrounds; and the nuances in languages can also create challenges for effective communication. Only a worker who has shared an experience or knows the idiosyncrasies surrounding an expression can fully comprehend it. The worker who knows all of this has a bridge to the non-English speaking world, and at the same time, also serves as a bridge to the broader community of service providers and support agencies for the non-English speaker.

“I work with a lot of people with mental illness now, and I can see that with somebody who doesn’t speak English very well—and has mental illness on top of that. Sometimes we meet people who speak a foreign language, and even the workers who interpret for us don’t even understand what the client is saying, because of whatever existing mental condition they may have.”

To Dominic, languages are different ways of looking at the world. But it’s experiences in situations like this that lead Dominic to remind students, who, like himself, grew up in a bilingual home:

He continued to point out that if a person grows up in a different cultural background, and has any sort of capacity in a foreign language, they should build upon it. If a person is an English speaker and wants to widen their perspective, they should learn other languages, or learn in another language. Whether it is for personal enjoyment, or as a stepping-stone to working with other people, Dominic sees this kind of language-building practice as an important step in overcoming cultural boundaries.

Another thing, he added, is the importance of learning languages within their cultural contexts.

“You can get really good at a language, but the cultural nuances, and the implications within the language, the slight wording and intonations — that’s caught by someone who grew up within that culture, or is highly knowledgeable about it. Somebody coming from outside of it may be able to speak the language fluently, but they may not have the depth of understanding in the cultural sense. You can communicate, but the piece that makes the feelings, the emotions, and the understanding — I don’t know if you get that without a cultural background.”

As a bilingual speaker of Mandarin Chinese, I realized through my conversation with Dominic that I’ve set unbelievably high standards of language fluency for myself. Since I grew up in a bilingual household (my mother immigrated from Taiwan when she married my father), I’d always harbored this notion that the only way for a person to know a language and culture was to become a hundred-percent, native-level-fluent speaker of that language — anything less than that was simply “not good enough.” And, to be honest, that notion challenged me to continue reaching for a higher level of language fluency and cultural knowledge. What Dominic showed me, however, was that communicating across languages and cultures requires equal effort on both parts. This is not to say that we all need to be 50% fluent in every single language out there in the world; we just need to be able to meet a person “halfway.” We should foster an appreciation for the languages and cultures that we encounter throughout our lives, whether we are fluent in them or not. This is what the multilingual workplace is all about.

Author: Danicia Honda is a Senior at the University of Hawai‘i-Mānoa pursuing a double major in English and Chinese, and a minor in Music. During her free time, she likes to read, sketch, hike, and watch BuzzFeed and TedxTalks videos. She is often fascinated by how differently (and similarly) people from different places think, and spends copious amounts of time meeting new people. Danicia also enjoys performing with the UH band, and thanks her fellow band mates for putting up with her spontaneous yelling during sporting events.