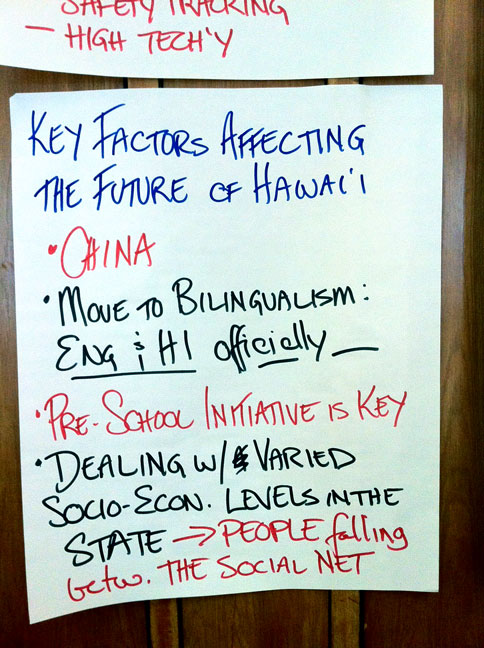 The process begins by researching, selecting and interviewing key stakeholders in the public and private sectors (government, business, and education). Once demand for language capacity is established, the next step is to convene these key stakeholders to identify factors that drive the requirement for global education, including language, at the state and local levels. Through the Language Summit process, senior representatives drawn from throughout a state or city – from local and state government, business, and social services – delineate the demands for language and culture skills in a systematic, facilitated forum. The “solution” side, primarily educators, seeks to learn from the demand side, the business and government sectors. Through a series of working group meetings after the Summit, stakeholders identify strengths, weaknesses, opportunities, and potential barriers, associated with effecting change in language and cultural education. From this analysis they craft a Language Roadmap for policy and action that integrates language into the educational system which is meant to produce working professionals with skills needed to be competent and competitive. During the next few years a key team of stakeholders oversee the implementation of the steps outlined in the Language Roadmap. Hawaii

Responding to Congressional interest in 2006, the National Security Education Program’s (NSEP) The Language Flagship developed and coordinated a pilot language roadmap effort originally deployed in three states where there were Language Flagship centers. Each center, along with their host universities, implemented a multi-month project –six to nine months, generally– that began with research and a Language Summit; followed by a series of working groups; and culminating with the publication of a Language Roadmap for their state. Since then several states have conducted similar efforts resulting in Language Roadmaps (i.e., Utah and Rhode Island). The multi-month aspect of this process allows for the identification of stakeholders who are interested in long-term change and support for language education as part of workforce preparation. The process raises awareness among a broad constituency in education, business, and government that could potentially become supporters for change. It takes time to identify and build a cadre of support among these various sectors. Thus, from experience, we have learned that a six- to nine- month process provides the necessary initial time to garner support for change. Haw 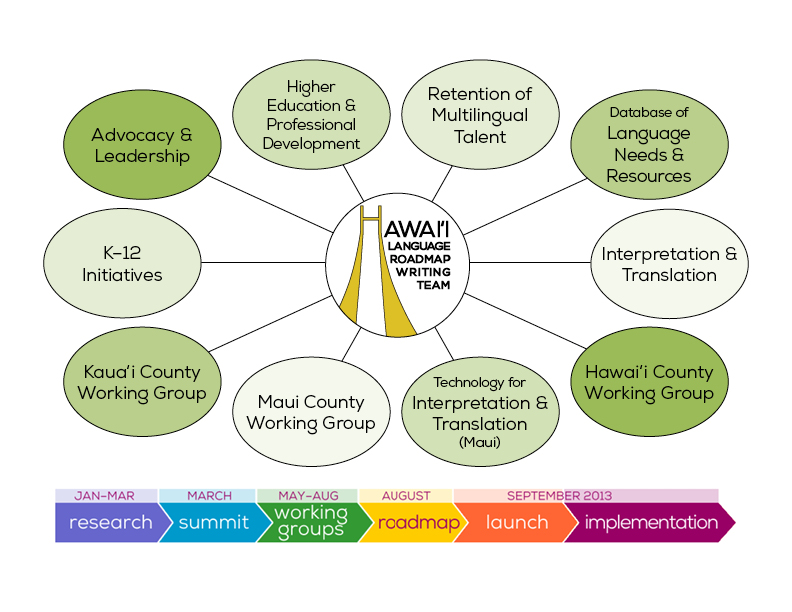 An all-day “Language Summit” brings together representatives from the business sector and state and local government agencies to delineate their demand for language skills in their workplace. Representatives from the “solution side,” that is, from higher education, K–12 sector, state boards of education, the parental and political community contribute to the inquiry by asking questions about the level of need (i.e., proficiency in the language as well as the context for language use). The identification of the invitees and the preparation for and execution of the Language Summit organization takes, generally, eight to twelve weeks and overlaps with the Research Phase. Summit documents are available here.

Following the Language Summit, a series of working groups composed of representatives from business, state and local government, and education (both K–12 and higher education) meet to begin to outline four to six key areas for change that will constitute the “roadmap” for the creation of a linguistically and culturally adept workforce. These working groups develop a strategic plan that reflects economic, political, and social realities of the state. Participants in the Working Groups are derived from the Language Summit and others who are interested in shaping the Roadmap. Generally they meet repeatedly over the course of three to four months with the goal of producing recommendations for the draft of the Language Roadmap. Working Group documents are available here.

A state Language Roadmap is the final product of this first phase of inquiry into the need for language skills in the state. Gleaned from a multi-month effort including research, a Language Summit, and working group suggestions, the Language Roadmap provides strategically developed proposals that guide stakeholders –be they legislators, businesspeople, educators, or parents– toward specific actions to support language and cultural education that can be implemented over the short (3–5 year), mid (5–10 year) and long term (10–20 years). The crafting of this Roadmap follows the Working Group phase, generally taking four to six weeks to write, edit, and design graphically for hard copy and electronic production. The Language Roadmap is launched at an event that convenes the stakeholders from throughout this multi-month process. The planning for this event takes about 6 weeks (from the invitational process through the event).

Implementation Phase: Next Steps after the Language Roadmap

After this initial phase (that includes research, the Language Summit; Working Groups; and the writing and launch of the Language Roadmap), there should be, ideally, a multi-year phase for the implementation of the recommendations found in the Roadmap. Each state has a different approach to this. Some already have offices focused on the support of foreign or world languages under which the Language Roadmap may be implemented. Others, working through a university, continue their original Working Groups to focus on garnering even further stakeholder support and turning the Roadmap recommendations into reality. In either case, the funding of organizational leadership for this post-Roadmap phase is crucial to the long-term effectiveness of this process.