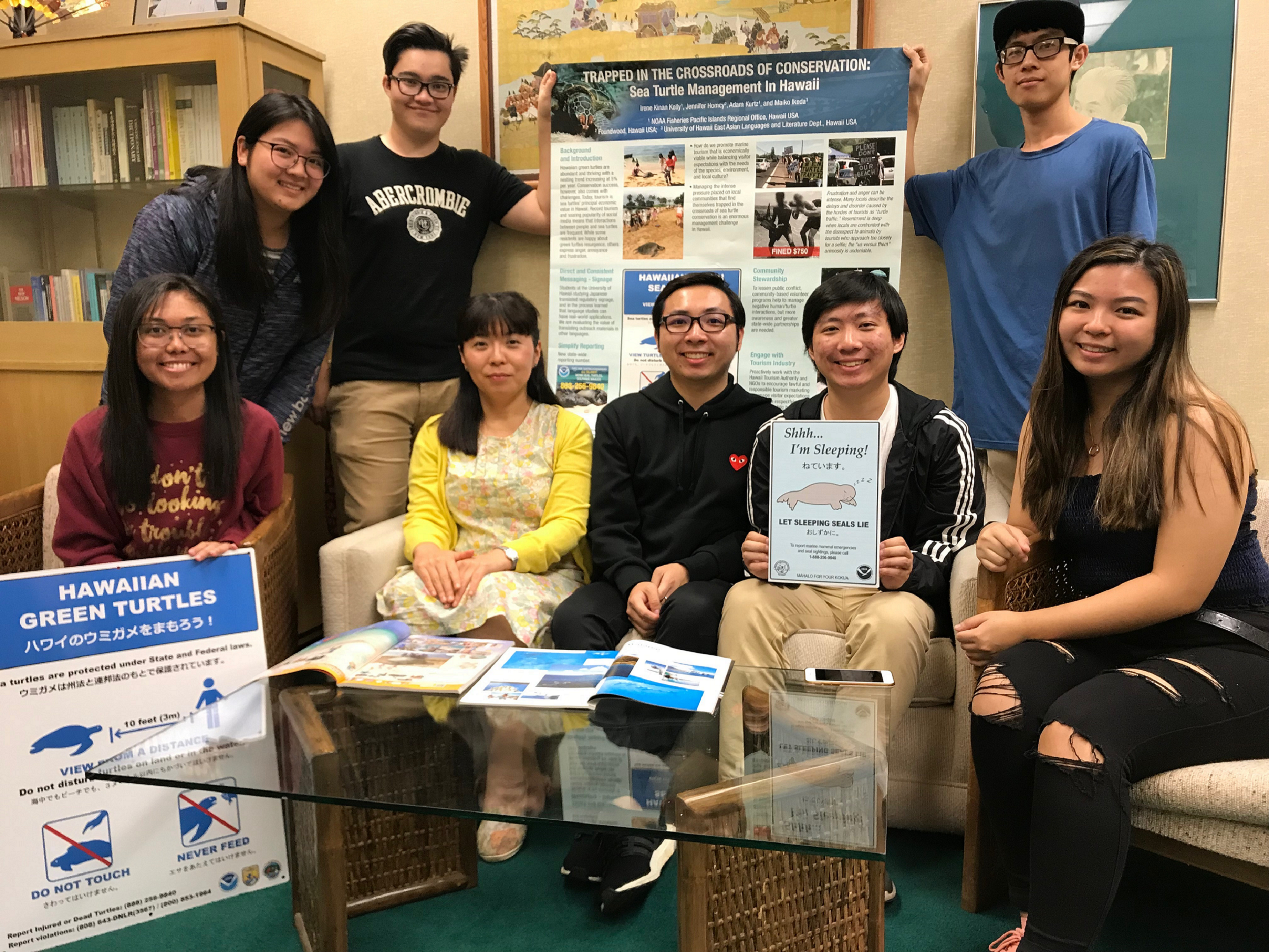 “How am I going to use my language degree after college?” is a question many students who are majoring in a language as an undergraduate degree wrestle with. The fear and uncertainty of not knowing what opportunities are available is evident in the minds of those who choose to pursue foreign language as a major. Language students are often led to believe that they can only seek an occupation relating to education, tourism, linguistics, or translation. They often underestimate the power of language as a skill that can make an impact in our society. This is the message that Maiko Ikeda, a doctoral student in the Department of East Asian Languages and Literatures, showcases as she leads her students to make a difference with their linguistic skills.

Maiko Ikeda, who is pursuing a PhD at the University of Hawai’i at Mānoa, instructs Japanese Sociolinguistics courses for her department’s Japanese undergraduate program. Due to an overwhelming amount of requests by her students to create a lesson plan on how to incorporate Japanese into the field of tourism, she went on several fieldwork trips to Laniākea Beach and downtown Waikiki to collect data on how Japanese language was being used in a tourist setting. During her fieldwork trips, she had the opportunity to chat with local shop owners and bus drivers. From her conversations she learned about their concerns in regards to tourist interactions with nature in Hawaiʻi. Throughout the day, she noticed the same dialogue among various locals; they were confused as to why tourists from Japan did not follow “local rules”. For instance, people raised in Hawaiʻi generally understand that touching sea turtles is prohibited and everyone must be respectful towards our protected sea creatures by providing them space. On the other hand, tourists would often be spotted touching and getting too close to sea turtles that were resting on shore. After hearing the concerns from the locals, Maiko felt compelled to help protect nature.

During our interview, she mentioned her love for nature and how it came to be: Whenever she was overwhelmed or stressed, nature played a big role in helping her overcome her stress. She stated, “Nature helped heal me and I wanted to give back to nature with my Japanese skills.” In order to protect nature in Hawaiʻi and teach her students the value of language, Maiko began identifying various solutions by partnering with her students and the National Oceanic and Atmospheric Administration (NOAA).

Through partnership with NOAA, Maiko began a volunteer organization with her students known as PONO (‘righteousness’ in the Hawaiian language) in Spring 2017. PONO is a group seeking to protect the ‘āina (land) through their knowledge of language. The members of PONO take initiative by using their language analytic skills to bring positive change to our environment and community. PONO has members from all walks of life, including current students and faculty at UH-Mānoa and Tokai University, former students, bilingual speakers, people from overseas, locals, and marine biologists. As a new and upcoming group, they have proudly taken on various projects to make a positive change in Hawaiʻi. Some of these projects involve analyzing guidebooks and magazines for Japanese tourists visiting Hawaiʻi, and informing NOAA about misleading information that might lead visitors to engage in inappropriate or in some cases illegal contact with marine life. Other endeavors that they have undertaken are their partnership with NOAA to create accurate signs and viewing guides for marine life in English and Japanese, and helping Malama na Honu to design Laniākea Beach as an educational beach for conservation of sea turtles through signs and viewing guides for English- and Japanese-speaking visitors. They continue to take on more projects “to protect our environment and land with the use of language”. 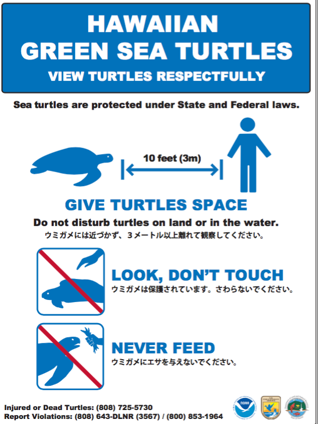 The original signage does not convey the authority of the message effectively.

As a group, one of the first projects PONO worked on with NOAA was the translation of the sea turtle viewing signage. First, Maiko assigned the students to examine signs being used to inform Japanese tourists on how to interact with marine life. Different members were given the same data in order to analyze how the translations would be interpreted by the reader. From this critical analysis, they were able to catch the incorrect usage of Japanese language and understand why tourists were not following the messages conveyed by the signs. Members spotted signs that stated: “Look, Don’t Touch”, with the Japanese wording conveying a lenient tone; the strict message the sign intended to convey was lost. After reviewing the signs and identifying the problem, members of PONO thoughtfully worked to use their language skills to find appropriate wording for the signs. 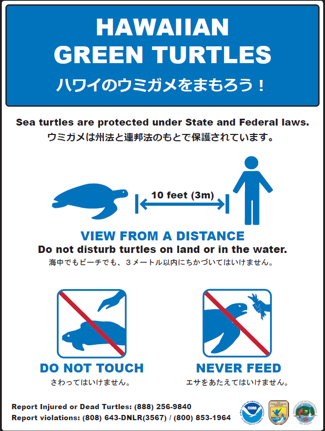 In the updated Japanese version of the sign, the new wording created by PONO members and students in JPN 202 (Fall 2017) conveys the force of the English text effectively.

As this project developed, the number of student members, and the depth of their interest in the project, grew.  Among the students who took a deep interest in this work is Joseph Iseri, who is currently a 2nd year student at University of Hawaiʻi at Mānoa. Joseph is the vice director of PONO and Maiko’s right hand man. He stated that a lot of thought went into rewording the signs. For instance, PONO came together and conscientiously discussed what wording and signing formats would deliver the appropriate message. They considered the importance of the use of the two different forms (polite and casual) in Japanese language. They discussed which form would be necessary because each form triggers a different reaction when read or recited aloud. Another interesting topic they hashed over was deciding who would be the main voice of authority on the sign. For example, “Will it be more effective for us to have a government-associated voice like NOAA to communicate our message? Or will it be more effective to take a friendly approach by having an eye-catching turtle communicate our message?” — those views were factored in in order to encourage appropriate behavior from tourists.

After designing the artwork for the signage and translating the texts, PONO members and students of Maiko’s Japanese Sociolinguistics class ventured off campus to the streets of Waikiki to get input on their work from Japanese visitors. In order to ensure the new wording was appropriate, they went out to Waikiki to interview native speakers. Japanese tourists were approached by students and PONO members to be interviewed. Specifically, they asked a variety of questions as they showed both the old and the revised signage. Showing visitors the previous signs, they asked how certain words (e.g., yookoso ‘welcome’) made the person feel when they read it—do they understand it as a message to interact with the sea turtles closely? With the revised signs, members asked questions to make sure their strict message was being conveyed without making the reader feel offended by asking the visitor’s input on how they felt as they read it. The feedback PONO received from the native speakers was taken into consideration and the signs were revised one final time. As a result, signs with appropriate and effective translation were created and our marine creatures on our ‘aina are protected. Recognizing the benefits of PONO’s work, Irene Kelly, Sea Turtle Recovery Coordinator of NOAA Fisheries states: “We support them 100 percent. They have a strong potential for educating and promoting awareness. Its great to see what they are doing and we hope they continue to use their skills.

People like Maiko Ikeda, Joseph Iseri, and the members of PONO—our Language Champions—answer the question, “How am I going to use my language degree after college?” through their actions. They display to us that language can be used to protect anything we value. They remind us how powerful language is.  So, how will you use your language skills today?

Author: Narin Lee is a Senior attending the University of Hawai’i at Mānoa as an English major. Her normal day starts off with a good cup of coffee, without it she will not be able to function well. If someone were to see her on a day without coffee, they would be able to immediately recognize a difference in her persona. With her daily dose of coffee fulfilled, she is like day, someone who is attentive and full of energy. Without her daily dose? I’d rather not talk about it.  Other than her serious dependence on caffeine, she has an enormous soft spot in her heart for dogs.