On October 16, hundreds of students from the University of Hawai‘i-Mānoa flocked to the Imin International Conference Center for the Nippon (Japanese) Culture Day. The annual occasion celebrated Japanese Language and Culture, and included a variety of fun activities: origami folding, calligraphy, trivia games, koto demonstrations, and more. In addition to the occasion’s festivities, the Culture Day also provided Japanese students an opportunity to inquire about study abroad programs, internships, and job opportunities. Recruiters from Wyndham and Disney stood among the plethora of informational booths, brochure displays, and prize drawings. In a place where language use is so prevalent, these employers sought the opportunity during Nippon Culture Day to recruit Japanese-speaking students for their workforce. 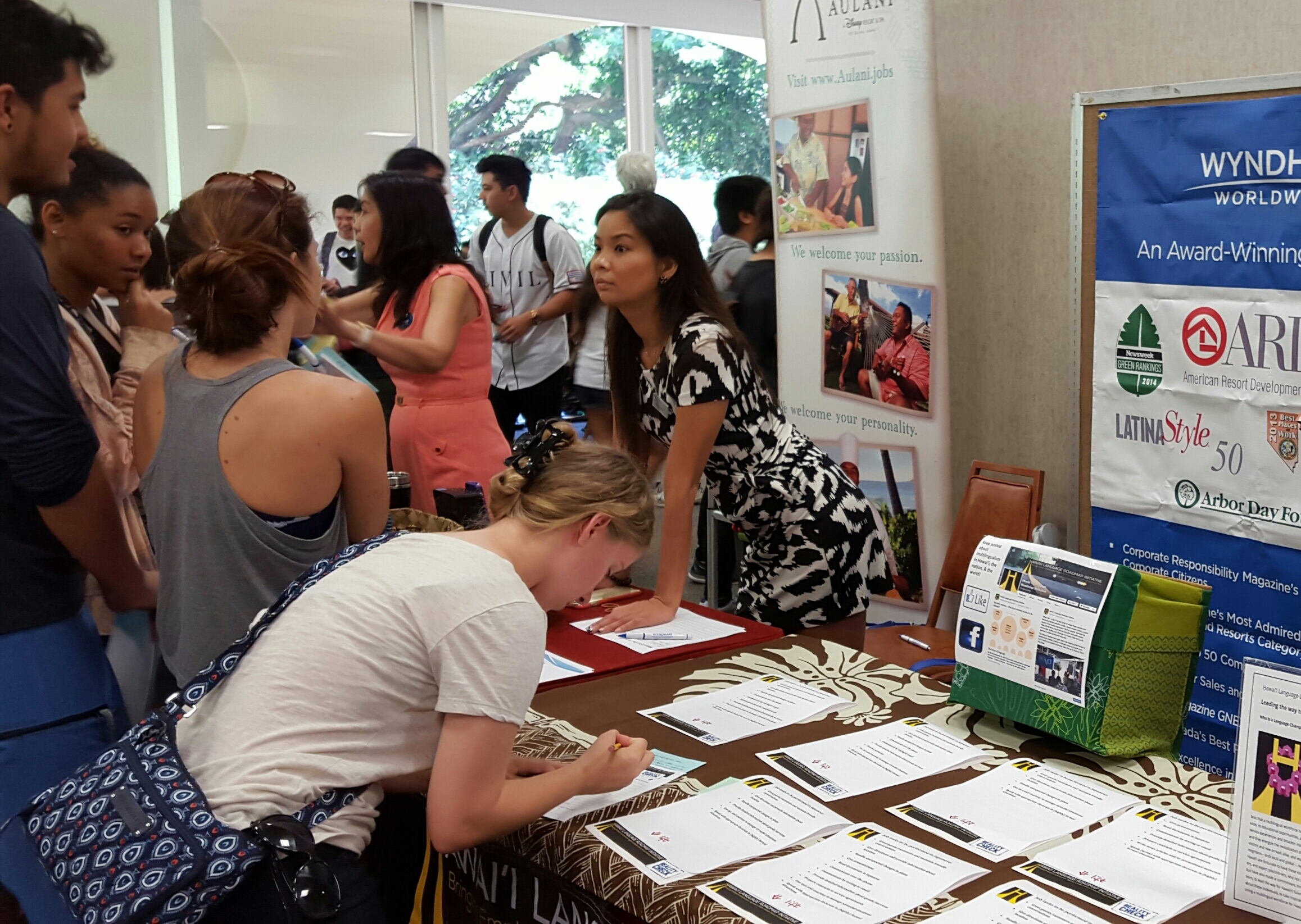 Wyndham seems to be a good place for Japanese students who are not necessarily bilingual but who are proficient in conversational Japanese.

“If you are a Japanese-speaking marketing agent, you would basically just have to find people on the street and make conversation. The invitation itself is Japanese, so even students with a conversational-level of Japanese would be suitable for this job. One of our marketing agents cannot read Japanese, but she’s doing well, so if you can connect to the people it’s not a big deal.” 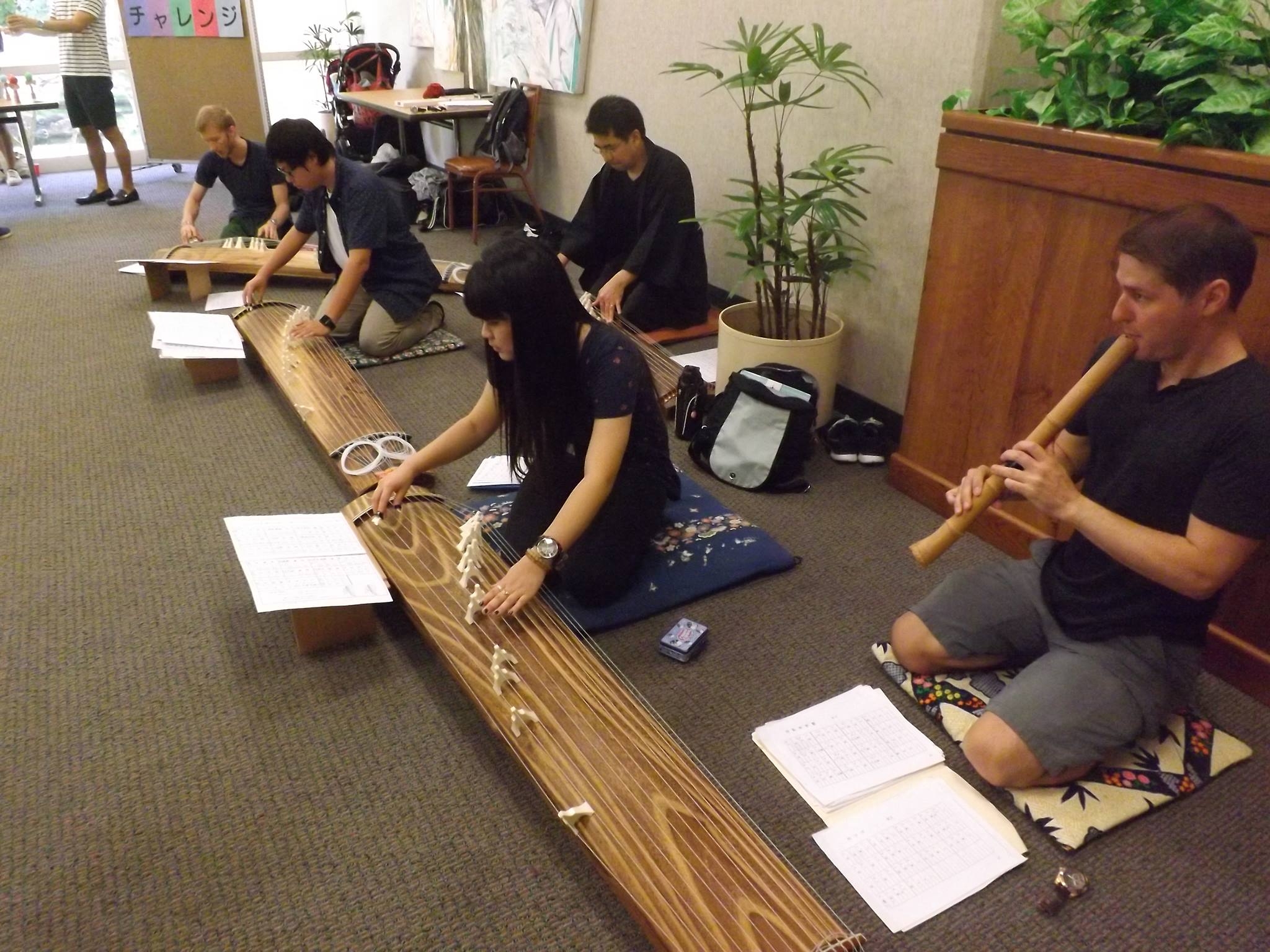 UH-Mānoa’s Nippon Culture Day included a variety of fun activities, including koto demonstrations and much more.

While Wyndham, stationed in Waikiki is currently looking for sales and marketing agents, Aulani, a Disney Resort and Spa, located on the Leeward coast of O‘ahu, is accepting applicants in a variety of fields. Lianne Maeda, Recruitment Manager, stated that Aulani provides workers with opportunities to work in their field of interest.

“We’re not just a traditional resort. Because we’re an entertainment company, we have very unique facets of what we’re able to provide to our guests, so we have an entertainment department, which encompasses everything from our Aunty’s Beach House, which is a licensed childcare facility with the state, to people who support the family and children activities for the resort.”

“though there are certain roles where you do have to be Japanese bilingual speaking. I have a bilingual Japanese/English sales manager position posted right now. We have a lot of Japanese guests who come to the resort and stay at the resort; some of them also purchase timeshares as well. We also have a public relations manager who is bilingual Japanese speaking, and her focus, along with a team on the mainland, is to increase Japanese interest in the market to bring over to Aulani, so we’re generating a lot of business that way.”

If a student were interested in applying as a Japanese-speaking worker, they would have either a phone or in-person conversation with a representative at Aulani, who would then determine whether or not their language skill is at the level they seek. If it is, and if the applicant is hired, the applicant will receive a Japanese language pin, and a language premium will be added to their base pay. During the language assessment, there will be guest situations or scenarios for the applicant to respond to in Japanese. For Aulani’s purposes, the applicant should be able to provide directions, deal with issues, such as problems with a customer’s credit card. The resort reserves key positions for more advanced Japanese speakers who are more proficient in dealing with critical guest situations or special scenarios.

Wyndham and Aulani are just two of the many companies out there for students learning Japanese to look into while searching for jobs, especially for students currently learning the language and who might not consider themselves to be fluent yet. If you are able to hold light conversation in Japanese, provide general informational details, and answer simple questions, definitely look into Wyndham and Aulani for work opportunities.

Author: Danicia Honda is a Senior at the University of Hawai‘i-Mānoa pursuing a double major in English and Chinese, and a minor in Music. During her free time, she likes to read, sketch, hike, and watch BuzzFeed and TedxTalks videos. She is often fascinated by how differently (and similarly) people from different places think, and spends copious amounts of time meeting new people. Danicia also enjoys performing with the UH band, and thanks her fellow band mates for putting up with her spontaneous yelling during sporting events.